How To Fear Success More Than Failure 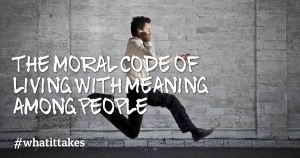 I watched as a father walked his son from the baseball field to the car. The game had ended but the scolding continued. While play was underway, he had tongue-lashed his son for swinging, watching pitches and for hitting balls to the “wrong” places.

Perfection covered the field of play and unseen land mines were everywhere ready to explode in front of everyone. As the year progressed, the boy learned to leave his bat on his shoulder and either walk or strike out looking at the pitches thrown. He ceased to be aggressive. He feared failure more than he wanted success.

As he grew older and left home, his fears of making mistakes increased and so failing often followed him into his position as a salesperson. Each day he was beaten in his spirit way before he picked up the phone and asked a prospect for an appointment. It was tough for him to give his best to achieve important sales and income goals because he feared doing things wrong.

And he was his own worst critic at work and at home. When someone did speak a word of criticism, he multiplied the intent and took the comment with anger At the same time, he felt more of a failure than ever before.
………………..

Today, another crisis exists with many young men and women without fathers or a parent that is present to teach them about commitment and sacrifice as a part of making things better in life.

As the culture moves toward one of entitlement, a sense or individual responsibility leaves as part of the moral code of living with meaning among people.

Even where dads and moms are present, they often hover over their children and helicopter them into believing they are competent before they grow in their skills (ex. trophies for losing). This causes their children to increase in self-esteem while they decrease in willpower and self-control. They become addicted to short-term pleasures they feel they deserve and never learn the rigor that is a part of excellence in any endeavor.

Ambition diminishes for a noble aim – one in which there is meaning and purpose and a reason to fight the forces and chaos that keep a life from getting better. People then fear success and the resulting responsibility and staying power required to form the new habits for the increased service that success demands.

Salespeople with a fear of success quit when its tough going. They complain about hard work. They self-sabotage their way forward with lazy and inconsistent attempts at prospecting behaviors and the right levels of held appointments. And, they have not emotional connection to their goals which means they HAVE NO GOALS. They fear success more than failure.

Be careful thinking you can coach this person. Be careful giving this person a job. Helping them break through their fear of success will mean that you will father or mother them into maturing as a responsible adult. And that’s possible but it mean you will have to be exceptional at coaching.