How To Get Helpful Advice From A Bell-Shaped Curve 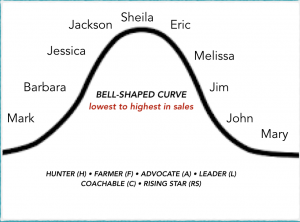 I know you’ve been thinking about how to best coach the new rep. You want to do this well because you can’t afford to get them off to a poor start. Today, good people are just so hard to find.

But, what about the team. What happens when you’re given a team of new people, or you try to strategize how to increase the average, monthly team production? Most sales leaders, especially new ones, want to know how to  to best approach coaching a team for optimum effectiveness.

I want to introduce you to a tool, a bell-shaped curve. After you draw one, I want you to rank your people from low to high in sales or gross margin sold. Write their names on the curve from left to right, lowest to highest, based on their production. Then, those in the middle of the curve will represent your average performers. On the right your best – on the left your worst.

Next, label them. Label some as Hunters (H – will pursue new business and market share), others as Farmers (F – good at maintaining customer business/relationships), or farmer-types, and Coachable (C– eager to grow and learn a new skill).

If somebody has a book of business, label them as having customer Advocates (A). What about if they are a Rising Star (RS) or they are a Leader (L) now or a potential leader in the future? As you label your salespeople on the bell-shaped curve, some of them may have more than one of these designations.

Fundamental #1 – Coach the Middle
If you coach the salespeople in the middle of your curve, and they get better,

the people at the top will feel some performance pressure on their position in the hierarchy.

This will cause top performers to increase sales. Moderate performers will begin to move to the right to higher sales level as you coach the, and that will also pull some people on the bottom to the right. As a result, the whole bell-shaped curve will move the average team production if you coach the coachable people in the middle to improve.

Fundamental #2 – Coach the Rising Stars
That should be obvious; they’re ready. They want to grow. They want to get better. You see them as a star for the future, so coach them next.

Fundamental #3 – Challenge the Top Performers
Find a valid reason for a top producer to boost their sales. Perhaps it’s because of competition – somebody outside of your group, i.e. point to somebody else. Get them to see they could do more than they currently do. If you can convince one of your best to improve (perhaps one of them wants more income for a certain reason), and their sales go up, the middle will also advance, the bottom improves and the whole bell-shaped curve moves, just like when you coach the middle. Coach the folks at the top to higher performance.

Fundamental #4 – Develop Leaders
Find a leader who will help you. This is going to allow you delegate coaching time and influence. It will also help you become a leader of leaders (VP type) and increase your potential for handling large organizations. Pick someone at the top who will help you with training, perhaps with someone they have more natural influence with than you do.

Other Bell-Curve Strategies
You can also rank people on a bell-shaped curved according to a certain product category, or perhaps gross margins or dollars per sale. Maybe your rank people by number of appointments set. Or perhaps they’re giving products away at low margins and they’re not selling value. They’ are price-focused.

When you have visual bell-shaped curves in certain categories, you can actually decide how you’re going to coach somebody. You can see how the bell-shaped curve gives you great advice. It shows you where to start, what to coach and who to involve.

Now go out and make your team better! Lance