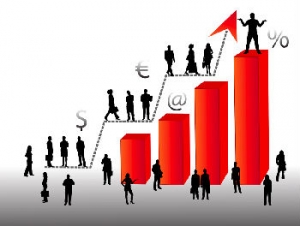 What specific things do you do to increase the sales of your team (Or yourself if you are a salesperson.)

Here’s a thought ...
To increase sales performance, LEADERSHIP must help individual and team motivation to increase by inspiring a (new) desire to achieve sales beyond current levels. Leadership must create a new environment in which the individuals and team will motivate themselves.

and, they must believe the coaches think they have what it takes.

Example: A few years ago I was asked to kick off a planning session for a Sprint Regional VP of Retail Sales (one of three). Attending the planning session were the VP’s Area Managers for 13 states. I simply challenged them in the following way.

“What is your goal?”

As the planning began, the team took over and I basically watched and prodded a few times, but the sale was over. They did not want to be last again. Much more occurred that day as I built up their belief in the new goal, and we began to grow in confidence as a plan of actions began to take place. We then talked about how they would monitor results, meet to adjust the plan during the year, and bring celebration of progress to all the managers and the salespeople. Long story short - this team went from last region to top region in one year.

They found a heart for THEIR OWN sales goal,

built belief and confidence in a plan and developed their leadership and communication strengths for the fight ahead. Victory. I did not have to touch that team for the rest of the year. They did it. They did it. I love this story. It’s one I’ve seen over and over again, albeit with different motivations. Lots of serious fun.

Now, go and make things better.  You can.  Lance.

Before, I wasn't giving individualized coaching or spending time with reps at the point of sale actually showing them how to get new results.

The best coaching story I have as of late was with an average rep, Eric, who was consistently earning 3-4 grand each month. I spent time with him on the phone and face-to-face qualifying each customer with specific questions to find a need for a particular item. I also showed him how to get referrals with follow up calls - 3 months later he has gone from 4 grand to $7,500 and lead the market in data sales.