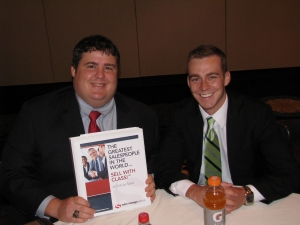 Look through these killers to change and performance improvements.  Most of them have to do with attitudes and beliefs and what salespeople value -  thing like extra effort, feeling and looking good, old routines, failure, self-discipline, hard work, pride in old skills, current achievement levels.  All of these relate to the values and beliefs acting through a person upon the world around them.  They are hard but not impossible change.  What if your sales force were made up of individuals with the following 6 character traits.  I call them “The Non-Negotiable Six.”

When I remember sales managers I found hanging from bridges near their offices, the last letters they left behind contained references to salespeople who lied, were lazy, didn’t care about others, were negative, prideful and arrogant, and wore their names on their suits wherever they went.

Having poor character makes it difficult to change to more effective ways of doing things.  Why?  It’s hard for most people to acquire new habits and change.  They don’t look good while failing at the new skills.  Pride and arrogance keep them from seeing the faults of the old ways.  Laziness creeps over their efforts.  Selfishness keeps them from following up to make sure products and services perform to expectations.

When new recruits have these character traits, their combinations produce other strengths.  For example, we see conscientions and humble salespeople display courage, when leaders ask them to go in another direction, to increase activity levels, or to learn new skills.  We see goal-orientation strengthen in personally responsible and hard working salespeople.

Of course, there can be exceptions.  You can decide to hire or keep a person who is somewhat negative, prideful, and needs recognition as long as the first four are present.  However, trouble and management needs will begin to increase, and if you decide to eliminate the first four beginning with honesty, sales rep turnover and perhaps customer dissatisfaction will begin to increase as well.  This could affect profits for a long time and like Enron could lead to the end of your business.

Learn how to recruit character first.  The traits will affect new rep performance even before coaching begins. The values of the salespeople and leadership you select affect their ability to change to more effective ways of doing things.  They also cause them to do so in a way that brings lasting value to your image, customers, other employees, and profits.  In future posts, we will talk about character discovery tools in the recruiting process.  Our next issues will cover two more coaching methods that remove roadblocks to change.  We’ve started the discussion this week by encouraging you, as Jim Colllins does in Good to Great, to get the right people on the bus.  Start here and make things better.  Lance