The Optimistic Person Perseveres When Tested In A Trial 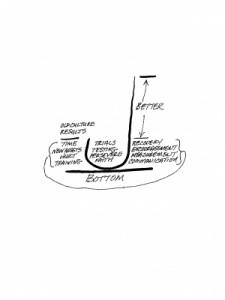 At present, I provide directional and moral support to someone who runs a 30 million dollar division of a national company. Many difficulties hammer his optimism as I watch him suffer through a strain on his faith.

After two months of installing changes, his division is down year over year. He looks incompetent when compared to his peers. But, he is doing the right thing.

He is rebuilding his culture.

Having chased other priorities for several months and recognition from the wrong people, he is now focused on income for his employees, profits for his company and outstanding relationships with his customers.

During the past sixty days, he has removed ineffective or dishonest leaders. In doing so, he has uncovered massive problems with employee morale. In some parts of his organization he has discovered bad hires, low work ethic and dishonest business practices.

Introducing the J-curve, a financial term that applies to times of initial loss followed by a significant gain.

In an economy when a currency is devalued, the balance of trade initially weakens before it recovers to a higher level as compared to where it began.

In a dysfunctional organization, when a leader refocuses everything on how healthy teams win, they still lose at the same rates and sometimes at higher ones – until the accumulated effects of the new way lead to higher returns.

Maybe you have to fire a dishonest leader who runs a part of your division that operates outside of the values you want. When that happens other employees leave. Your salesperson count goes down, and while you keep honest, hard-working reps, you must hire additional ones to get back to previous sales levels. And, the new reps must suffer through training new hires and rebuilding brand strength and loss of market share.

Getting rid of leaders also leaves unmanaged portions of your business that put a coverage strain on you and other leaders. People work long hours to fill in at all levels. Family life is impinged upon. Stress increases. Production decreases and losses increase as you shape the new culture.

Times of turbulence and stress put the integrity of a leader on trial. Internal and external questions occur. Do we really have to give outstanding customer service? Do we really have to be fully honest? Do we have to work this hard? Will it, the new way, pay off? Will we get there? Will it be better for us if we do?

It’s difficult to maintain integrity in times of turbulence and chaos.

Real time results threaten a leader’s faith and perseverance in the rebuilding strategies. New choices and alliances have to be formed in leadership. The temptation to hire “just anyone” must be overcome. Other pressing matters cause you to listen to competing voices that say, “Just look away, stop pressing, slow down. It’s not that important, but your stock prices, investor relations and immediate results are!”

Many of us experience a lack of results in the initial weeks of a new physical fitness plan. We hurt all over. Our backs are sore. We hear the same voice, “Just go to the couch, eat some popcorn, drink a beer, watch some TV.”

We do not build our businesses or our bodies to last unless we persevere, in faith, toward the weightier matters. Friedrich Nietzsche, the nineteenth century German philosopher, once said, “What doesn’t kill you, makes you stronger.” Resiliency. Perseverance. Faith in doing what is right. Maturity. They all go together in an ancient and powerful set of words by a friend of Jesus. James said,

“ … be joyful whenever you face trials of many kinds, because you know that the testing of your faith produces perseverance.  Perseverance must finish its work  so that you may be mature.”

We all want mature parents, mature leaders or mature salespeople. But to grow in this chaotic world implies a testing of our faith. We will face trials in life at home and at work. Our maturity in any role will grow as we persevere in a right direction – one that benefits those around us, doesn’t harm them and contributes to a better life.

Prepare yourself for trouble. Struggle as you develop a good reputation and as you learn to give your best. Shape your resolve and resiliency. Maintain your integrity and grow. Mature as a valuable contributor to the lives of those around you and remember you can make it through the J-curve to better health and better result that before.