This Is What Happens When Character Multiplies Genetics! 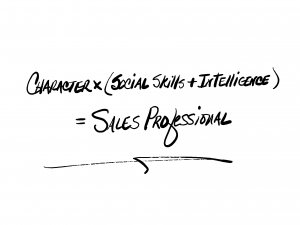 This What Happens When Character Multiplies Genetics!

For tremendous rewards in sales performance, which sales candidate do you want to hire from the three below?

We would like to hire someone with all three – intelligence, good with words and driven to succeed and serve others. But let’s face it, from the candidate pools we recruit from, there are very few 10s in all three.

How do we make the best choice? Let me help with a couple of facts.

So, let’s say personality + smarts = better performance. Research papers and common sense point to this truth. But, there’s still a problem. What if a person is dishonest and lazy and irresponsible and doesn’t care about how they serve people? What if a person is not motivated to achieve goals? To sum it up, what if they are not a trustable, coachable or conscientious person – a person with low character?

In the book, Good to Great, Jim Collins says that the greatest companies, the ones with the most sustained fiscal performance, recruited character first. They recruited people they could train to do the job – the coachable ones, the ones that worked hard to meet expectations, to achieve, and the ones that were a pleasure with which to work.

Dr. David McClellan, an American psychologist, became famous for developing a Achievement Motivation theory. He is the fifteenth most cited psychologist of the 20th century. He demonstrated the importance of understanding how people thought and feel and then acted.

How does a top performing sales rep think and feel? What do they value and how do they feel and then act when those values are in conflict?

When at work, the best sales performers work hard, and are dutiful to the task sequence that helps them meet their sales objectives (which they monitor progress towards). Whether behind or ahead, they keep themselves directed at achievement. For salespeople, many studies show that the conscientiousness trait, a person ordering themselves to an achievement mindset, contributes to high sales performance. If we add this knowledge to the work by Jim Collins,

we find that character, the accumulation of honesty, hard work, responsibility, a concern for others and achievement motivation, may have a multiplying effect on the genetic gifts we are born with … the “Rudy” (the movie) complex.

Who do you want to hire out of these next ones:

Of course, the intelligence and social skills of someone may not be high enough for you to take a chance on them. But, all things considered, character should be non-negotiable plus you can lift social skills in training with people who work hard and have a concern for others.

Yes, character helps you get the most out of yourself and provides more to work with in a new recruit – one who will help and not harm your brand. And, that’s what happens when you recruit character first. You get a honest hard-working, coachable person who want to do what it takes to achieve goals.

We can test for the personality traits that predict social sills in sales and that measure general mental ability. But, how can we measure character as defined above?

We can do that by using structured and character based anchor question and then dig further with layered questions for the truth. For two in-depth interviews, conducted by different people for greater predictability, we have written 12 questions to test for character. Here are a couple of examples from our Recruit the Best!™ Field Manual.

HONESTY
If I was your sales manager, would you stretch the truth in order to make a sale? (If they say yes, skip to the next character question.) If they say no ask, ”What if it wouldn’t hurt anyone but would increase sales?  (Award 5 points only if the candidate continues to say “No.” Award 0 if they hedge or qualify their answer.)
Hard Work Ethic
When we call them, what will your past two bosses or supervisors say about your work ethic? What will your previous co-workers say? What examples will they give us? (Award 5 points only if the candidate can give reasonable examples of a hard work ethic. Award 0 points if they cannot give them.)

MOTIVATION
What is the minimum amount of money you need to earn if you come to work with us? What happens if you do not make this? What if you make 1-2 thousand less – what difference would it make? (How does their answer relate to the minimum amount for this position? Do they talk in terms of minimums just to pay bills (to survive), or a minimum amount above and beyond their bills to pay for a certain lifestyle: children’s education? How strong and certain is their motivation tied to what they talk about?)

These are typical character and motivational questions. When asked, we check out their answers with 1-2 layered questions like; “Why is that important to you” or, When you say _______ what do you mean?”

We train interviewers to start with 12 character-based questions – to explore a candidate’s answers for golden moments of truth. That’s because, as mentioned above, character-based conscientiousness drives a person’s ability to get the most out of themselves for you and your customers.

Just like the greatest companies in the world, you can learn to recruit character first. You can take the longer view toward sustained performance and brand management by realizing that character multiplies genetic gifts in homes, boardrooms, playing fields and sales teams.